The Grand Strand's third oldest and most well-known golf club, the Surf Club, as the Surf Golf and Beach Club is known, comes from an original design by George Cobb, with timely renovations keeping the venerable club competitive with newer, more gaudier area courses.

The club opened in 1960, and was first renovated in 1990 by John Lafoy. He re-did the greens and bunkers, added some contour and small mounds in places and added some depth to the greens, but mostly left the fairways alone.

In 1996, the club replaced the greens with G2 bentrgrass, which proved to be pivotal and has kept the club competitive. Some of the greens are two and even three-tiered. Beyond that, the course is a traditional layout, a parkland setting with wide fairways and minimal fairway bunkers.

Water is in play 14 holes, but is mostly cosmetic, and the trouble is largely around the greens. The course is perhaps best-known for its collection of par-3s, which many consider to be among the best on the Strand, especially No. 18, a carry over a lake to a small green. The course also has a good mix of distances in its par-4s. Its length is 6,842 yards, and the semi-private club sits on 200 acres of contoured and varied terrain. 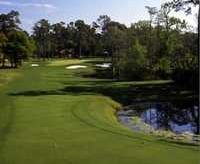 This course has not provided us with a golf tournament information link. You can call them at (843) 249-1021, (or send them an email). Please ask them to update their BestOutings information including their tournament link to help other event planners.


Host your outing at Surf Golf & Beach Club. Click the link below to go directly to their tournament and outing information page. Or call them at (843) 249-1021.