A private enclave set against the Atlantic Ocean and its tidal salt marshes, Bulls Bay personifies the vision of its founder owner: Joe Rice, and the imagination of its artistic designer, the late Mike Strantz. An accomplished professional artist as well as golf architect, Strantz transformed a once flat stretch of lowcountry coastline into a landscape reminiscent of the great links courses of Scotland and Ireland.

Roughly two million cubic yards of earth was moved to reshape the site. And while other courses, especially modern courses, have required as much earthmoving, few, if any, architects have transformed a site with such dramatic results.

At Bulls Bay, Strantz created 75-foot elevation changes and 360-degree views unlike any in the lowcounntry. But more than providing dramatic views, Bulls Bay, with its firm, sandy turf and its ever-present wind of the ocean, is a true links golf experience reserved exclusively for its members and their guest. At Bulls Bay , there is no traffic or intervening real estate, no tennis courts or swimming pools to detract from the pure golf experience. Other country clubs or developments may boast that golf was given first priority: At Bulls Bay, golf was and is the only priority. 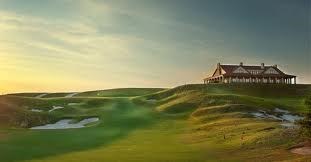 This course has not provided us with a golf tournament information link. You can call them at (843) 881-2223, (or send them an email). Please ask them to update their BestOutings information including their tournament link to help other event planners.


Host your outing at Bulls Bay Golf Club. Click the link below to go directly to their tournament and outing information page. Or call them at (843) 881-2223.