The original 18 of its 27 holes were designed by Willie Park Jr.—one of the game’s most revered architects—Islesmere is a tree-lined, narrow, strategic course; patience is truly a virtue here. Renowned Quebec course architect Howard Watson later added the other nine holes.
Islesmere has held many professional tournaments over the years, including the men’s and women’s Canadian Opens, two Canadian PGA Championships, the Quebec Open, and the Montreal Open. Past winners of these events include Willie Lamb, Bob Gray, Stan Leonard, Moe Norman, Doug Ford and Byron Nelson. Nelson’s win at the 1945 Montreal Open included a course-record 63 and the victory was part of his record 11 consecutive wins that season.
A 55,000 square-foot clubhouse gives stunning views from the large terrace. The clubhouse offers meeting rooms, plus three large areas for weddings, banquets and many other events. Practice facilities include a chipping green with a bunker and an approach area, along with a large range. 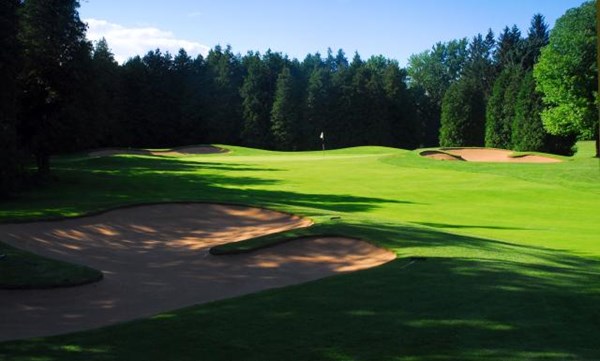 This course has not provided us with a golf tournament information link. You can call them at (450) 689-4130, (or send them an email). Please ask them to update their BestOutings information including their tournament link to help other event planners.


Host your outing at Club de golf Islesmere. Click the link below to go directly to their tournament and outing information page. Or call them at (450) 689-4130.