In a very brief time, Club de golf Le Fontainebleau has developed respect and a legacy usually reserved for courses decades older.
A beautiful property that mixes gently rolling countryside and mature woodlands, Le Fontainebleau engages golfers right from the first tee shot, including PGA Tour and Champions Tour players. Le Fontainebleau, which opened in 2003, is conveniently located about 35 minutes from downtown Montreal in Blainville, Que.
In 2010 and 2011, Le Fontainebleau once again hosted the Champions Tour for the Montreal Open, won in 2010 by Larry Mize and 2011 by John Cook. Both years, the players raved about the course, especially the three climatic finishing holes (The Hat Trick) that wrap around a lake just in front of the regal clubhouse. The course received similar plaudits from Phil Mickelson, John Daly, Vijay Singh and Hank Kuehne during the 2004 Skins Game.
Designed by Graham Cooke and Darrell Huxham, the 7,105-yard, par-72 layout has strong green sites with large putting surfaces that are highly contoured and protected by bold bunkering. Cooke and Huxham dug many fairways below grade to provide more definition and variety, as well as pleasing views of the dense trees that dominate the course.
The neo-classic style clubhouse is tastefully appointed and affords lovely views of the verdant course. 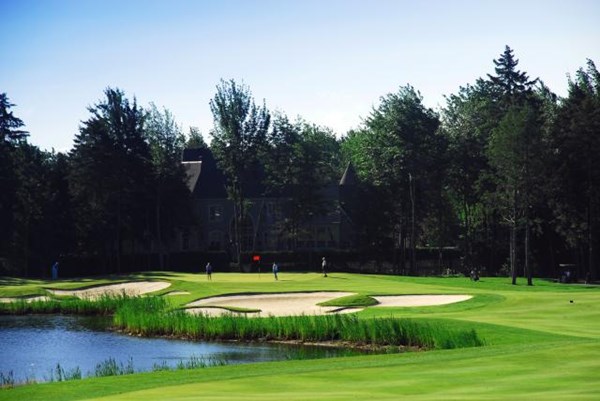 This course has not provided us with a golf tournament information link. You can call them at (450) 434-7569, (or send them an email). Please ask them to update their BestOutings information including their tournament link to help other event planners.


Host your outing at Club de golf Le Fountainebleu. Click the link below to go directly to their tournament and outing information page. Or call them at (450) 434-7569.