About Country Club of Scranton:

The Country Club of Scranton’s golf course has been affectionately referred to as the “Jewel of Northeastern Pennsylvania,” and Bob Ford, Head Golf Professional at Oakmont Country Club, once was quoted as saying that our greens were the second best he had played, ranking them only behind those at his highly regarded home course.

The Club’s original 18-hole course was designed by the famous Golf Course Architect Walter Travis in 1927. The “New Nine,” as it was named, was designed by Dr. Michael Hurdzan in 1988 and, like the original course, is best known for its large undulating greens. The three nines, appropriately named the Pines, Willows and Falls, combine to make three eighteen-hole courses, the Old, North, and South. Each nine offers a wide variety of challenges but each is still forgiving in its own way, which makes the course attractive to both low- and high-handicaps players alike

Outings at Country Club of Scranton:

Host your next golf outing at Country Club of Scranton.
www.ccscranton.com 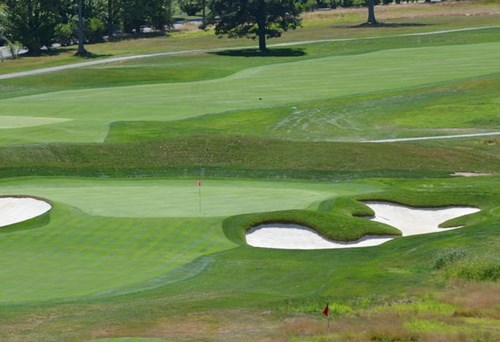 This course has not provided us with a golf tournament information link. You can call them at (570) 586-2311, (or send them an email). Please ask them to update their BestOutings information including their tournament link to help other event planners.


Host your outing at Country Club of Scranton. Click the link below to go directly to their tournament and outing information page. Or call them at (570) 586-2311.