The first course in Canada designed by Greg Norman, Wyndance has been meticulously shaped to take advantage of the existing terrain and sandy rock faces of the reclaimed gravel pit site upon which it was built. Large waste bunkers, loose rock outcroppings, and fairways lined with fescue convey the aura of playing golf in the American Southwest, a feeling reinforced by the architecture of the clubhouse. The clubhouse patio and banquet facility offer panoramic views of the course.
Forgiving off the tee, Wyndance is a second-shot course requiring exacting approach shots into greens that are heavily guarded by run-off areas and pot bunkers. The back nine skirts the gravel pit and offers impressive vistas of the property on holes 12, 16, and 18. The 18th is an exceptionally strong finishing hole, requiring a forced carry over the quarry pit from most tees.
Wyndance also features a first-class practice facility including a 2.75-acre range, 18,000 square-foot putting green and a 7,600 square-foot chipping green with a practice bunker and apron. The “Down Under” Academy course is a short nine-hole facility built into the middle of the quarry pit and provides a challenge for high- and low-handicappers alike. 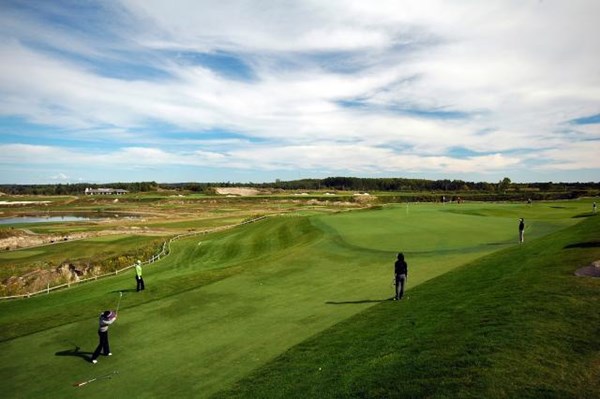 This course has not provided us with a golf tournament information link. You can call them at (905) 649-8545, (or send them an email). Please ask them to update their BestOutings information including their tournament link to help other event planners.


Host your outing at Wyndance Golf Club. Click the link below to go directly to their tournament and outing information page. Or call them at (905) 649-8545.