Gardiner's Bay Country Club's hilltop links stretches nearly 6,500 challenging yards from the tips, but is accessible to average skill players from both the white and red tees. Sections of the course date back to 1896 and the layout takes maximum advantage of the topography of Shelter Island’s glacial past, with water views from several holes. It is a joy to play.

The original architect is unknown, however, in 1914 when Charles Blair MacDonald (of National Golf Links fame) was approaching 60, he convinced his protege, Seth Raynor, to strike out on his own. So Raynor took up the torch, applying MacDonald’s philosophy and putting his own virtuosi touch on the classic ideas absorbed from his mentor. In 1915 Raynor revised and added holes to Gardiner’s Bay Country Club. In 1916, Raynor and MacDonald worked together on the redesign of Shinnecock Hills, whose membership had been feeling miffed at being outshone by The National. Raynor would later go on to design many of America's best, including; Fisher's Island, Camargo Club, Yeaman's Hall, Shoreacres, Lookout Mountain and Yale. 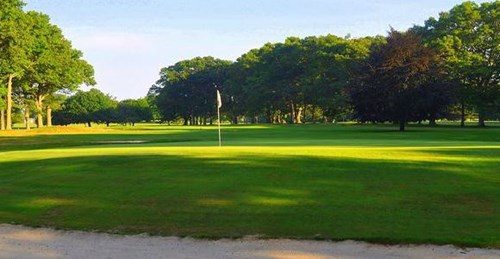 This course has not provided us with a golf tournament information link. You can call them at (631) 749-1033, (or send them an email). Please ask them to update their BestOutings information including their tournament link to help other event planners.


Host your outing at Gardiners Bay Country Club. Click the link below to go directly to their tournament and outing information page. Or call them at (631) 749-1033.