Harbor Links Golf Course supports fundraising events!
Get a TravelPledge account and get a golf certificate for your upcoming event. You can also request certificates from other local golf courses!

Harbor Links 18-hole Championship Golf Course has best been described by Powers Golf Guide-"The 18 hole championship course is built on a reclaimed sand mine against the water... Some interesting features: a bluff was stabilized with teeing areas that step up the slope; three holes have split fairways allowing a choice off the tee and entry to the greens; holes 12 &13 sit on an area that was used for tailings from the mine and look very similar to a western course. Hurdzan has again paid his respects to the environment by working around wetlands, adding tall fescues, habitat boxes for birds and generally letting the original features guide him. The latest turf grasses were used on fairways, greens, and rough"

The nationally renowned golf course designer Dr. Michael Hurdzan designed Harbor Links. Dr. Hurdzan is internationally recognized as the authority on golf course environmental issues. In 1997, Dr. Hurdzan was named the Golf World Magazine's "Architect of the Year." Other Hurdzan designed courses include: Devils Pulpit and Devil Paintbrush in Ontario, named by Golf Digest as the Best New Courses in Canada in 1991 and 1992 respectively 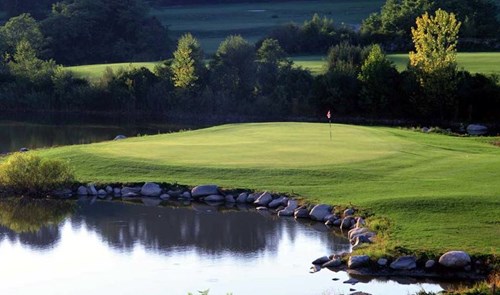 This course has not provided us with a golf tournament information link. You can call them at (516) 767-4816, (or send them an email). Please ask them to update their BestOutings information including their tournament link to help other event planners.


Host your outing at Harbor Links Golf Course. Click the link below to go directly to their tournament and outing information page. Or call them at (516) 767-4816.