Designed by Donald Ross in 1924, the championship 18-hole course at the Linville Golf Club is open to members and to guests of The Eseeola Lodge. Tucked away in the majestic Blue Ridge Mountains, players are surrounded by breathtaking mountain scenery and a creek that winds its way across the beautifully conditioned fairways. Linville Golf Club is one of the most esteemed in North Carolina:

The historic course was North Carolina's first golf facility, opening a few holes at a time in 1895. The resort had 14 holes by 1900, was hosting tournaments in 1910 and had a full-time professional.

The Linville layout, at an elevation of 3712 feet, was built on a picturesque 130-acre tract to help attract guests to the Eseeola Lodge, which was opened in 1892. The lodge, on the national register of historic places, will begin its 117th year as a popular mountain destination in May of 2009.

Ross, who was living in Pinehurst, designed the current layout, which was begun in 1924 and completed in 1926, using mules and pans to carve out its spectacular mountain setting.

Host your next golf outing at Linville Golf Club.
www.linvillegolfclub.com 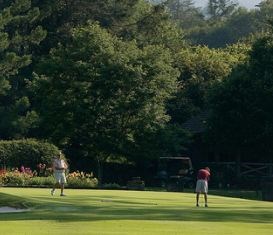 This course has not provided us with a golf tournament information link. You can call them at (828) 733-4363, (or send them an email). Please ask them to update their BestOutings information including their tournament link to help other event planners.


Host your outing at Linville Golf Club. Click the link below to go directly to their tournament and outing information page. Or call them at (828) 733-4363.