Hendersonville Country Club has its origins in the 1920s as a part of a real estate called Laurel Park Estates. The ambitious plan included plans for a grand 15 story Fleetwood Hotel on top of Hebron Mountain. Legendary golf course architect Donald Ross designed the course. Work on the development was halted in the early 1930s and the city of Hendersonville took over ownership. In 1933 the first 9 holes of the course opened.

Members of the local Rotary Club purchased the golf course during the 1930s, then sold it back to the city and leased the right to operate the Club. In 1945 the Club Members purchased the Club back from the city. Over the years a swimming pool, tennis courts and a fitness facility were added. The Club has evolved into a very active private Club with a diverse membership. 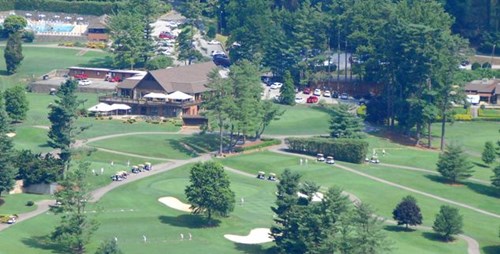 This course has not provided us with a golf tournament information link. You can call them at (828) 692-2261, (or send them an email). Please ask them to update their BestOutings information including their tournament link to help other event planners.


Host your outing at Hendersonville Country Club. Click the link below to go directly to their tournament and outing information page. Or call them at (828) 692-2261.