Long ago Osage Indian tribes lived in this remote area. These densely wooded rolling hills were one of their principal meeting places. Numerous "thong trees" (saplings bent to the ground and tied down), found throughout Indian Rock, were used by the Osage Indians as markers to show the way to various destinations. While playing golf at Indian Rock it's not hard to imagine the sheer beauty and serenity that early natives must have experienced when they discovered these picturesque grounds. 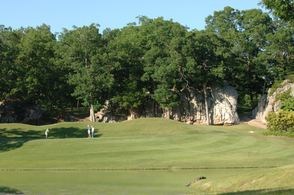 This course has not provided us with a golf tournament information link. You can call them at (573) 372-3023, (or send them an email). Please ask them to update their BestOutings information including their tournament link to help other event planners.


Host your outing at Indian Rock Golf Club. Click the link below to go directly to their tournament and outing information page. Or call them at (573) 372-3023.