Pine Lake Country Club was founded in 1902, as the Automobile Club of Detroit, by a group of like minded automobile enthusiasts, who were the icons of Michigan business at the turn of the century.
By 1905, they sought a permanent home for their club and they were offered a "very picturesque site" on Pine Lake by the property owners, George and Agnes Hodges. Hodges built the original clubhouse at his expense and leased it to the club for $500 yearly.
In those days, when the north boundary of Detroit was not too many blocks beyond Vernor Highway, driving a car to the wilds of Pine Lake was a major adventure. The beautiful bluff overlooking the lake became a favorite overnight camp site for practically every Detroiter who owned a car. 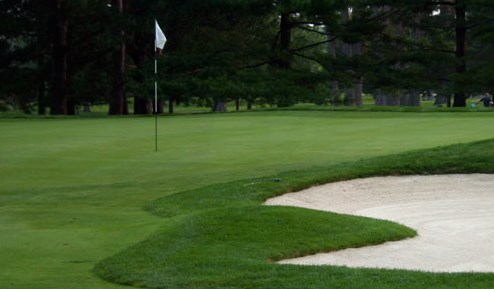 This course has not provided us with a golf tournament information link. You can call them at (248) 682-1300, (or send them an email). Please ask them to update their BestOutings information including their tournament link to help other event planners.


Host your outing at Pine Lake Country Club. Click the link below to go directly to their tournament and outing information page. Or call them at (248) 682-1300.