Crumpin-Fox Club was conceived in 1969 as the “field of dreams” of David Berelson, who engaged the services of Roger Rulewich of Robert Trent Jones, Inc to locate a site that would accomodate a Pine Valley type golf course.
The Bernardston site was chosen, but the project stalled and did not take shape until 1977 when Andy St. Hillaire bought the project, completed the back nine holes and built the present clubhouse. Although Andy was a golfer of admittedly low persistence and high scores, he recognized the potential excellence of the design and preserved it until 1987 when he sold it to his good friend William A. Sandri of Bernardston.
Under the direction of Roger Rulewich, the front nine holes were built along with extensive renovations to the existing back nine holes, the driving range and the irrigation system. Bent grass fairways were planted and the course opened in June of 1990.

Host your next golf outing at Crumpin-Fox Club.
www.crumpinfox.com 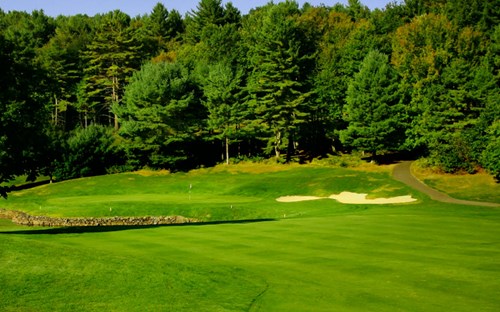 This course has not provided us with a golf tournament information link. You can call them at (413) 648-9101, (or send them an email). Please ask them to update their BestOutings information including their tournament link to help other event planners.


Host your outing at Crumpin-Fox Club. Click the link below to go directly to their tournament and outing information page. Or call them at (413) 648-9101.