The Highland Country Club was established in 1915. Much of the land had been orchard. The southeast parcel consisted of pear trees. In the valley where hole number 2 was built, cherry trees grew and were enjoyed by the golfers until the 1960s. Along Blossom Lane were rows of Apple trees, with the last apple tree dying in 2006. William H. (Bill) Diddle designed the 9 hole course. The completed golf course opened on April 15, 1916. Alex Baxter was hired as the first golf instructor.

In 1931, club member E.O. Robinson planned to give the Club land on the north side of Blossom Lane for an additional 9 holes. R.

In 1983 the course planned to expand from 9 holes to 18. Land on the north side of Blossom Lane was finally purchased. By 1985 the new nine holes, laid out by Arthur Hills.

The clay and slate soil of the hills around Highland make the land susceptible to slippage. In an effort to correct several landslides and to improve the course, new tees were constructed for holes 12, 13 and 17 in 2000. Holes 12 and 16 were determined to be too close and number 12 green was moved 100 feet, allowing for a pond between the holes. Golf Course architect Jodi Kinney handled the rennovations. 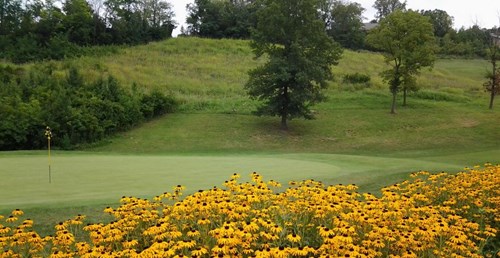 This course has not provided us with a golf tournament information link. You can call them at (859) 441-0221. Please ask them to update their BestOutings information including their tournament link to help other event planners.


Host your outing at Highland Country Club. Click the link below to go directly to their tournament and outing information page. Or call them at (859) 441-0221.