The concept for Black Sheep Golf Club was developed by a small group of golfers in the fall of 1999. The intention was to build an outstanding golf course where serious golfer can play with a prompt pace and enjoy the camaraderie of friends and fellow members in an unpretentious and casual atmosphere.

Located west of downtown Chicago near the intersection of Interstate 88 and Route 47, Black Sheep is a 27-hole facility laid out across a former 285-acre farmstead. A former Ohio State golfer who played professionally for a brief time, David Esler designed the layout in keeping with such classic inland links as Shinnecock Hills, Prairie Dunes and Sand Hills.

In addition to the three nines – each of which is a par 36 and measures from 3,300 to 3,800 yards – Esler included a world class practice facility that includes a short game practice area and an exceptionally large two-acre putting green.

Strategic design along with the shear breadth of the property enabled Esler to design golf holes that have unusually wide fairways that give players of varying abilities several risk/reward options off the tee. In essence, the more a player risks in terms of hitting his tee shot in the direction of a primary hazard (water, prairie grass, fescue, wetlands, bunkers, etc.), the greater his reward – i.e., a second shot that provides a better angle of approach to the green, better visibility of the next shot, and/or a shorter approach to the green. 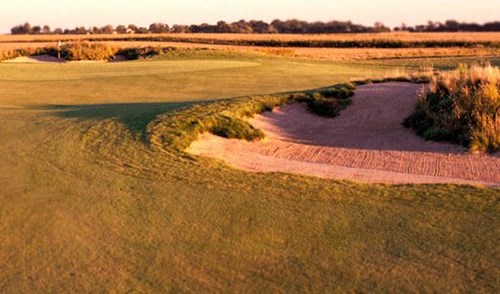 This course has not provided us with a golf tournament information link. You can call them at (630) 879-2000. Please ask them to update their BestOutings information including their tournament link to help other event planners.


Host your outing at Black Sheep Golf Club. Click the link below to go directly to their tournament and outing information page. Or call them at (630) 879-2000.