In 1923, a group of men organized a golf club, calling it “Fair Acres.” This nine-hole club was nestled among the giant oaks of South Moline Township. In a span of six years the club grew to almost two hundred members. At the 1929 annual meeting, it was decided to incorporate under the name “Oakwood Country Club.”
Today, improvements continue. Greens were re-seeded with A-4 bent grass in 2001 and the fairways were re-seeded with Memorial bent grass in 2008. The clubhouse was renovated in 2009, featuring an expanded horseshoe bar area, casual and formal dining areas, and a beautiful large patio area overlooking the 18th green. The result is a golf course that is notable for its natural beauty, and it continues to receive applause for its playing characteristics.

The dreams and ambition of a few young men many years ago have helped shape the present day Oakwood Country Club into a premier club in the Quad Cities. 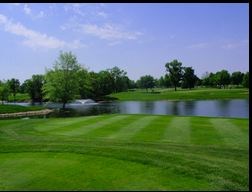 This course has not provided us with a golf tournament information link. You can call them at (309) 799-3153, (or send them an email). Please ask them to update their BestOutings information including their tournament link to help other event planners.


Host your outing at Oakwood Country Club. Click the link below to go directly to their tournament and outing information page. Or call them at (309) 799-3153.