The Hyperion Club was organized as a social club on January 25, 1900. The site for the Hyperion golf course was selected in 1907 and opened in 1910.
In the ensuing years, as club membership increased, the clubhouse was remodeled and improved several times. Then in 1972, the structure was razed and the present facility was built.
In Greek mythology, Hyperion was one of the Titans, the powerful gods of the ancient Greeks. Among Hyperion's duties was to lead the sun across the sky in his chariot. The Hyperion logo, a chariot super-imposed on a blazing sun, is symbolic of the god, Hyperion.

Host your next golf outing at Hyperion Field Club.
www.hyperionfc.com 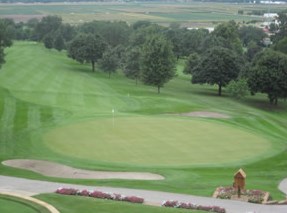 This course has not provided us with a golf tournament information link. You can call them at (515) 276-1596, (or send them an email). Please ask them to update their BestOutings information including their tournament link to help other event planners.


Host your outing at Hyperion Field Club. Click the link below to go directly to their tournament and outing information page. Or call them at (515) 276-1596.