Originally opened as the Bayshore Golf Course in 1923 as part of pioneering developer Carl Fisher's ambitious Alton Beach subdivision that was designed to lure wealthy winter residents from New York, Indianapolis and Detroit.

By 1923, Fisher and his colleagues had opened three big golf courses. Tourists loved the new courses.

In World War II, the U.S. Army rented the course for $1 a year as a training ground, and helmeted, rifle-toting soldiers ran through the course's palm trees amid the smoke from smoke grenades.

In 1944, Chicago investors moved to buy the course, planning to build 650 upscale homes there;disapproving neighbors persuaded the city to condemn and buy the land and keep the golf course.

In 1954, the ornate, Mediterranean clubhouse that Fisher had built on the course was replaced by a new one.

The face-lift was major: every blade of grass and most trees removed; lakes drained, redesigned and refilled; irrigation system replaced, even hills and bunkers bulldozed and resculpted; the old clubhouse demolished and a new clubhouse was constructed.

The City of Miami Beach hired Arthur Hills/Steve Forrest and Associates for the latest and most extensive transformation. The once tired and under-utilized Bayshore has now become the elegant and highly regarded Miami Beach Golf Club.

"The result is a beautifully restored landmark that will be enjoyed by South Florida residents and visitors from around the world for years to come," said Jorge Gonzalez, Miami Beach City Manager. 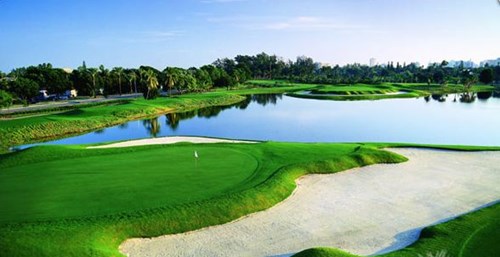 This course has not provided us with a golf tournament information link. You can call them at (305) 532-3350, (or send them an email). Please ask them to update their BestOutings information including their tournament link to help other event planners.


Host your outing at Miami Beach Golf Club. Click the link below to go directly to their tournament and outing information page. Or call them at (305) 532-3350.