Originally designed in 1959 by Robert Trent Jones, Sr., the course evolved under the supervision of Joe Lee and underwent a dramatic change, affording Royal Palm the distinct privilege to enjoy one of the area's few Jack Nicklaus Signature golf courses in 2002.
Blue lakes and water features, including marshy wetlands filled with aquatic plants, strategically placed bunkers and smaller, well protected greens are not the only challenges awaiting the golfer. Large waste areas have been carved between several holes, creating a new dimension of risk and adding to the visual relief of the emerald green fairways.
The par fives are very much risk/reward and because of the inclusion of five sets of tees it’s very playable no matter what level of golfer steps up the tee. Forward tees play just over 5,000 yards and championship tees play just under 7,050 yards.
There are no forced carries anywhere on the course and while many of the greens have adjacent hazards, Mr. Nicklaus gave the higher handicapper a bail out area next to the green so that a 150 yard shot over water is not so intimidating (honestly!). 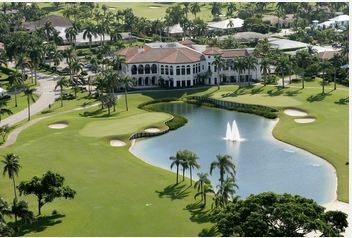 This course has not provided us with a golf tournament information link. You can call them at (561) 395-2202. Please ask them to update their BestOutings information including their tournament link to help other event planners.


Host your outing at Royal Palm Yacht & Country Club. Click the link below to go directly to their tournament and outing information page. Or call them at (561) 395-2202.