About Country Club of Waterbury:

In the 1890's, the sport of golf was rapidly growing in popularity throughout America. The city of Waterbury was no different, with the earliest known matches being played in the Spring of 1896 at the West End Golf Links along the east bank of the Naugatuck River, near present-day Colonial Plaza.

This early 9-hole course was created by Waterbury native Arthur Fenn and was well received by both men and women golfers who played regularly at the local course. By 1899, the Waterbury Golf Association had already been formed and less than a decade later would evolve into The Country Club of Waterbury.

Also in 1899, a 26 year old Scottish immigrant arrived in America and took up residence near Boston — his name was Donald J. Ross. By early 1907, the club had incorporated and the founding members commenced planning for a new course on 200 acres of pasture along the western end of Waterbury. In 1927, the club hired noted golf architect Donald Ross to develop a first-class 18-hole layout on a combination of existing and newly acquired land.

Outings at Country Club of Waterbury:

Host your next golf outing at Country Club of Waterbury.
www.ccwaterbury.com 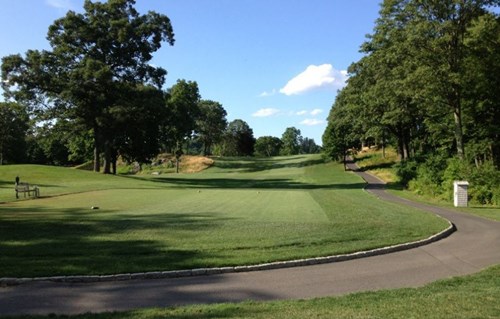 This course has not provided us with a golf tournament information link. You can call them at (203) 753-4171, (or send them an email). Please ask them to update their BestOutings information including their tournament link to help other event planners.


Host your outing at Country Club of Waterbury. Click the link below to go directly to their tournament and outing information page. Or call them at (203) 753-4171.