About The Course At Yale:

In 1924, a 700-acre tract of swamp and woodland was given to Yale by Mrs. Ray Tompkins in memory of her husband. Under the supervision of Charles Blair Macdonald, the renowned golf course architect, champion golfer, and co-founder of the USGA, plans were made for an 18-hole golf course. With a budget of $400,000, Macdonald, in collaboration with Seth Raynor and Charles Banks, designed a masterpiece which opened for play in 1926.

Today, the Yale Golf Course is recognized as one of the finest examples of early American golf course design. Large deeply bunkered greens and narrow rolling fairways are the core of Yale's penalizing character. In 1988, Golf Magazine ranked Yale as 71st among the 100 most difficult courses in the world. Many recognize the layout as the best collegiate course in the nation. Two of the holes- the 432-yard par-4 fourth and the 238-yard par-3 ninth - have been ranked among the 100 most difficult holes. The Yale course has been the site of every significant state championship, two USGA Junior National events, the 1991 NCAA Eastern Regional championships, the 1991 ECAC Men's Championship, and the 1992 ECAC Women's Championship. During the NCAA tourney, only 21 subpar rounds were recorded of the 360 played during the three days. The course has also been the home of the Nike Connecticut Open.

Outings at The Course At Yale:

Host your next golf outing at The Course At Yale.
www.thecourseatyale.org 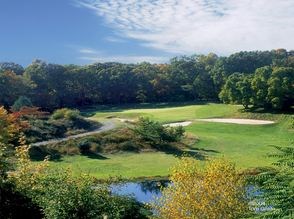 The Course At Yale location shown on map:

This course has not provided us with a golf tournament information link. You can call them at (203) 392-2376. Please ask them to update their BestOutings information including their tournament link to help other event planners.


Host your outing at The Course At Yale. Click the link below to go directly to their tournament and outing information page. Or call them at (203) 392-2376.