Victoria Club is located within the Tequesquite Arroyo and rests on approximately 130 acres of land. While the club was incorporated in October of 1903, it was actually the result of the members of the Riverside Polo and Golf Club (1896) wanting a premier club at which to play. The club is therefore considered a founding member of the Southern California Golf Association (1899). Charles Maud, the first president of the SCGA, laid out the original nine holes. Walter Fovarque was the course architect when a full eighteen holes was opened in 1920, and Max Behr re-designed the course in 1923. Behr's effort was lauded by golf course architect George Thomas in his book, Golf Architecture in America. Behr's design today is complimented by a picturesque setting amidst large Italian Stone Pines, California Peppers and large Oak trees.

Host your next golf outing at Victoria Club.
www.victoriaclub.com 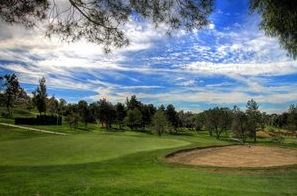 This course has not provided us with a golf tournament information link. You can call them at (951) 683-5323. Please ask them to update their BestOutings information including their tournament link to help other event planners.


Host your outing at Victoria Club. Click the link below to go directly to their tournament and outing information page. Or call them at (951) 683-5323.